A newly released study revealed that after a 20-minute bottle feeding, three important nutrients for infants–vitamins A, C and E–all declined during the course of feedings. The results suggest that the amount of air within a baby bottle, the bottle’s design, and the impact on vitamin levels warrant closer examination.

For many women separated from their babies–often due to work outside the home–choosing to express breastmilk and feeding it through a bottle has become more common. Millions of dollars have been spent in food science research to determine how to best maintain nutrients in cow’s milk. Expressed breastmilk has been over-looked when it comes to studies of nutrient maintenance during handling and feeding back. This study was designed to create a baseline of knowledge about how bottle feeding impacts nutrient delivery to infants. 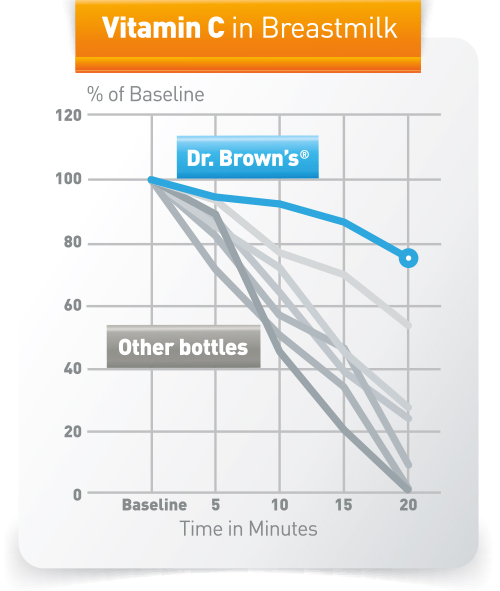 How The Study Was Conducted

The study, “Comparative Analysis of Retinol, Ascorbic Acid, and Alpha-Tocopherol in Baby Milk Using Varied Delivery Systems,” was conducted at the University of Nevada-Reno. The bottle study was designed to investigate changes in nutrient levels that might occur during a typical bottle feeding time of 20 minutes, using both expressed human milk and infant formula, in both vented bottles and unvented bottles. The study looked at the amount of nutrients in the milk when delivered through seven commonly used baby bottles, including Dr. Brown’s. The purpose was to determine if exposure to air within a baby bottle during a simulated feeding affected nutrient levels.

Dr. Brown’s Bottles Preserve Nutrients When Others Don’t
The graph demonstrates the loss of vitamin C during a 20-minute simulated feeding. While vitamin C began to decline at 5 minutes as shown by this graph, vitamins A and E declined later. Vitamin C prevents oxidation of nutrients and, as it is lost, other nutrients are more susceptible to damage. The Food and Nutrition Board at the Institute of Medicine recommends a vitamin C intake of 40 mg per day, 3 mg of Vitamin E and 400 mcg of vitamin A for infants up to six months old.

The Importance Of Nutrients For Babies
All three vitamins studied are important in infant health and growth. Medical research shows that children with low intakes of vitamin C are more vulnerable to developing frequent and more severe common day-to-day illnesses. Inadequate intake of vitamin E can lead to anemia and degeneration of the spine and brain. In infants, a low intake of vitamin A disrupts bone growth and interferes with the development of immature bone cells resulting in weak, poorly formed bones. Vitamin A is also needed to produce immune cells that are associated with increased resistance to infection.

Why Dr. Brown’s Bottles Preserve Nutrient Levels
The ability to preserve nutrients in bottle feeding appears to be influenced by bottle design. Once vitamin C–which is known to be susceptible to oxidation– degrades to a certain point, vitamins A and E begin to decline as well. The bottles used in the study were different from each other in the way that air is replaced in the bottle as milk is removed. Only one bottle–Dr. Brown’s–had a vent system that allows air moving into the bottle to bypass movement through the milk, with no bubbles forming as milk is removed. The competitor bottles observed to have more bubbles forming in the milk had lower levels of all three nutrients.

where to buy instructions faqs